Thursday, May 27 Another night of breaking news! I’ll start with that: Around 7pm (while I was in an editing bay), a wood shavings plant caught fire. We sent a live crew out for the 10pm. I didn’t go, though.

Another night of breaking news! I’ll start with that:

Around 7pm (while I was in an editing bay), a wood shavings plant caught fire. We sent a live crew out for the 10pm. I didn’t go, though.

At 9:30pm, another call came over the scanner for a fire in another part of Des Moines. On a whim, Keri Gavin and Will decided to go out. I came along, and we took a camera and a laptop for live streaming.

It was the first house fire I’d ever witnessed, so that was interesting in itself. The fire had started in the attic, and there were four fire departments fighting it. 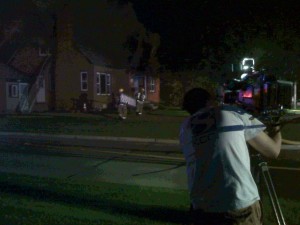 It started out with a lot of smoke, but flames emerged after a few minutes.

While Will, normally a sports guy, shot footage, I talked to a neighbor who gave me some details. The woman who owned the home was walking around in a neck brace, and she stood right next to us.

Keri sending photos of the fire - "Next Gen News"

I helped Keri find an outlet for her laptop since it was low on battery so she could do a livestream videocast for the 10pm news. She spoke on air over the phone while the control room back at the studio took the feed from her laptop – it was pretty cool. 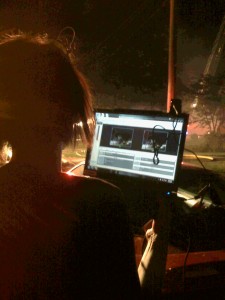 We found a better angle, and they came back to her feed right at the end of the show. What a crazy experience it would have been producing that show! 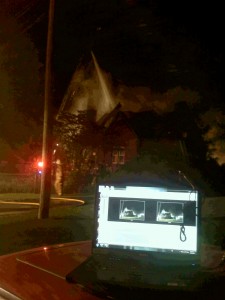 I also got to practice doing a standup, holding a mic in front of the camera and pretending it was a live report. It was harder than I thought, but I got the hang of it after a few times.

That’s it for exciting news.

I finished editing my Camp Lakota story on the linear editing system (tape-to-tape). I had some trouble with the miniDV adaptor for the system, so there is crappy audio/video issues. It took me a LONG time to edit – partly because of the adaptor syncing issues but mainly because I’m still getting the hang of hitting all the buttons in the right order. 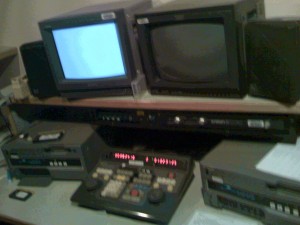 Despite the technical issues, I think it’s a pretty good story. I might come back and edit it on the Premiere to polish it – it’ll be online somewhere soon.

Another early morning shift, followed by having a part in the top news story of the day!

I wrote a few national stories, but for the most part observed the routine for weekday morning shows.

They’re a lot “newsier”: we have a reporter come in at 4am (Molly Nelson), and she usually does a live shot. We also have live traffic updates and often encounter breaking news situations.

Earlier that morning, there had been a standoff in Ogden where a man was shot and killed by police. Our Ames Livelink photog Dewey got the incident on tape, so we had nice sound and video.

I saw how busy it gets as a producer during the show. At some points, she was answering two different phone calls, monitoring the show, and setting up traffic shots.

A big part of the job was cutting stories. The show was pretty full of content, so if the anchors would ever go over or banter, it would usually cause Hillari to have to drop (or kill) a story.

To kill a story, it just takes a simple click in ENPS, the computer program running the show. However, she then has to communicate with the TD, director, and floor manager that the story is dead.

It could get kind of complicated if you had a very set flow of stories, where one anchor would eventually move to a different part of the set. If you were dead set on that, dropping stories left and right could cause some confusion.

I was nevertheless impressed that the show went off without a hitch.

Cool thing about the morning: a lady called in offering a story idea which was kind of iffy.

She said she’d seen a bunch of kids at Ledges park with a church group. She said they were only supervised by one person.

The kids apparently beat a raccoon to death and then got fined by the DNR.

Before the 9:30am news meeting, I’d called the Ledges park office for info. The man who answered the phone didn’t know anything but said he’d contact the guy working that weekend.

I didn’t hear back from them before leaving at 11am that morning, but I pitched the story in our news meeting at 9:30am.

BUT, apparently the DNR called our station looking for me to talk about the incident at about 1:45pm (obviously I was gone), so they talked to our assignment editor who assigned it to a reporter.

The story ended up being the top news story of the night (and on the web with 47 pages of comments!), and it was neat having a part in getting that started.

I went out with Tyler Kingkade to shoot a story about how businesses are using social media to interact with customers. 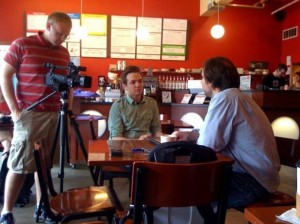 Interviewing the "Mayor of Mars Cafe"

We spent a lot of time at Mars Cafe, where they use Foursquare to offer specials and allow customers to “check in” on the site whenever they’re at the cafe.

We spoke to the “mayor” of Mars Cafe about his social media use.

The Des Moines Social Club was our next stop, where we spoke to their marketing gal.

Further information will be posted about the story – hopefully we get it together next week!

Today was supposed to be Internet day, but fellow intern Addison Speck and I decided to go to Ames and enterprise a story. 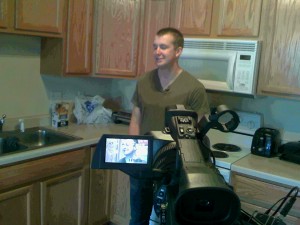 Her idea was to talk to students about troubles getting their deposits back after they leave their apartments.

We spoke to three different students who had trouble getting their deposit back due to damage and uncleanliness. They had some interesting stories.

We then spoke to a representative from Campustown Property Management about deposits and how students could get charged for leaving their apartments in certain conditions.

After getting some good interviews, we called it a day.

In the meantime, there was some interesting activity going on at the station. Slipknot’s bassist, Paul Gray, had been found dead in the hotel room that morning.

We’d heard rumor’s that it was him (and we got footage of them carrying out his guitar), but we couldn’t officially report that it was him until the police had confirmed it. Another one of those “accurate reporting” things.

I came back and noticed that nearly 4,000 people had “Recommended” the story on Facebook – it was a big traffic day for that story, so I had indeed missed some excitement on the Internet front.

Monday got more exciting as the day went on.

I came in for the nightside shift. I logged my Girl Scout story (went through and found soundbites that sounded good) and was asked to attend the Des Moines City Council meeting to take notes on a couple issues.

It was a minor task driving through downtown Des Moines and finding  a place to park. However, finding the council chambers within City Hall was easy.

The issues discussed were Dahl’s adding a new store/C-store/gas station/car wash to an intersection in Ingersoll. There were 12 residents of the neighborhood in attendance. Nearly all of them spoke in favor of not having Dahl’s be built in their neighborhood. I’m not completely sure of the entire situation, so taking notes was difficult. There’s a lesson for ya.

I also took note of the homeless shelter’s request to purchase a new chunk of city land. They needed to relocate after their recently-built shelter was facing lawsuits. The council didn’t seem to have a problem with it.

I got back and chilled in the newsroom for a while.

At about 9:50pm, we heard calls over the scanners that a girl had been shot in the chest.

I got to jump in the live truck with photog Spencer, while Todd and Donna rode separately. It was amazing seeing how quickly Spencer got the live truck set up (the microwave dish has to be raised and cables run).

Donna got the camera and IFB set up. Todd was ready, and we went on in time for the headlines at 10pm. Todd gave a brief report of the situation.

Because of a bad experience in the 90s, Todd and the crew wanted to get out of the neighborhood. We packed up and headed back to the station.

So it was an exciting end to what could have otherwise been a dull Monday.

Sundays are quite a bit different than other days of the week in the newsroom.

There’s only one reporter who comes in for dayside, Molly Nelson. I went with her and Donna to Elkhart to talk to a family who makes eco-friendly clothing inspired by their daughters.

I got to talk to Molly and Donna about reporting and the industry. Molly is a graduate of Fort Dodge High School, which is only about 30 minutes from where I grew up. Donna has been doing this for longer than I’ve been alive, so both were pretty helpful.

After I got back to the station, I went out with Donna again to go monitor a DOA situation. DOA, or dead on arrival, is when a body is found dead. The fire department investigates, and if more police show up, you know foul play may be suspected.

However, nobody showed up beside the Medical Examiner, so we went back to the station.

I wasn’t done yet, though. I hopped in the car with photographer Jeremy and went to a Vander Plaats endorsement gathering. Bill Salier, a marine and former candidate for the U.S. Senate, endorsed Vander Plaats in a park in Des Moines.

Since it was just the photog and me, I got to interview both Vander Plaats and Salier. Though it was just a matter of asking a couple of simple questions, it was kind of cool.

I went back and logged a SOT of Salier which was used on the 5pm.