Friday, June 11 Although I didn’t work today, the story about Des Moines businesses using social media for advertising was finally posted on KCCI.com.

Although I didn’t work today, the story about Des Moines businesses using social media for advertising was finally posted on KCCI.com.

Tyler wrote the story and did the interviews, and I shot it and taught him how to edit. He did really well for his first time editing. I mean, a lot of people don’t normally have their first-ever edited video stories posted on a legitimate news website.

Today there was big news regarding the Big XII conference.

I’m sure you’ve heard how the conference is falling apart. Geoff Greenwood (our more legal-oriented reporter and soon to be working for the Attorney General’s office) was sent to Ames, so I tagged along.

The guy who answered the phone at the ISU athletics office was extremely rude and not helpful at all to Geoff, so we ended up having to focus on the fan- and business owner-aspect of the story.

We talked to the owner of Dogtown University on Welch and some students in the MU.

After eating at Battle’s BBQ, the pouring rain throughout the day didn’t seem so bad.

My original intent was to put together a practice story based on Geoff’s story, but since this story is so up in the air regarding Big XII decisions and the B-roll and sources are located on several different tapes, I’ll probably wait until next week to focus on a simpler subject and perfect my editing/story writing a bit more.

That’s the last of this week – I get a Friday, Saturday, and Sunday break from KCCI this weekend. I’ll be shooting a friend’s wedding, so I won’t be away from the camera for long.

I didn’t do a whole lot, other than write a couple stories along with SOTs for Megan E, the fill-in 10pm producer.

In the mean time, Dave Busiek approved Tyler Kingkade’s story about Des Moines businesses using Social Media as free advertising. I shot the story, so I’m pretty excited for it to be on the Web. It’s almost three minutes and not really to-the-point enough for air, but it’s a good Web story. 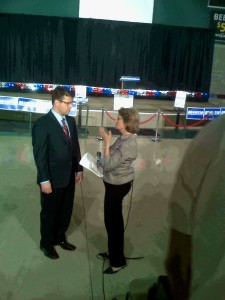 It was time for some spectacular election coverage at KCCI.

We had reporters live at five different locations, and at each location was a field producer. Field producers dialed into a conference call line, which was tied to an intercom line into the control room.

The news director Dave Busiek was the producer for the field producers: he told us when our reporter was coming up, and we told him who they would be interviewing and what was happening at each venue.

Three of us interns got to be field producers, so I went with Mollie Cooney to the Branstad location at Seven Flags.

We set up in time for both the 5 and 6pm newscasts. I used a wireless IFB (interruptible feedback) earpiece in one ear to hear what was going on through the station audio and a cellphone with the producer conference bridge in the other ear.

Since it’s about a seven second delay from the studio to over-the-air live, the reporter and camera operator on location have to rely on the IFB for their cue to start speaking and to answer questions.

It can be moderately confusing to a bystander in the remote location, because often times the IFB is hidden and the reporter will start talking, seemingly out of turn with the corresponding video. It’s humorous to see this.

I did some hunting down of people for Mollie, as she was wired to the camera/live truck and moving away to find interviewees would cause potential problems if she would need to go on air right away.

While it was a very crowded and loud room, I didn’t really have any trouble finding the people she needed to talk to. The only problem I had was getting Doug Gross to come talk – I made the mistake of walking up to him and saying “Hey are you Doug? Would you come talk to Channel 8?”

It wasn’t until later that I found out Doug Gross was kind of a big deal in the Republican Party. He just waved me off and walked away.

I went back and told Mollie, who ended up having to detach and go find him. She brought him back with no problems.

So they ended up calling Branstad the victor pretty late, so I didn’t get back to Ames that night until after midnight. However, the experience was a lot of fun, and it was nice to be depended upon by KCCI for something.

I was producer in the early AM this morning.

I helped out Hillari and Chris again, so I wrote a few stories. I’m getting better at entering MOS commands (for CG and titles, etc) into ENPS.

I also sat out and listened to the scanners while Chris had to step out of the newsroom.

It was a pretty uneventful morning overall.